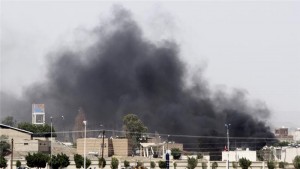 Saudi Arabia has said its decision to break diplomatic ties with Iran will not affect efforts to negotiate peace in Syria and Yemen – where the two regional heavyweights support opposite sides. Riyadh on Sunday severed relations with Iran after its embassy in Tehran was set ablaze during protests against Saudi Arabia’s execution of prominent Shia religious leader Nimr al-Nimr, who was put to death along with 46 other mostly Sunni convicts on terrorism charges.

Abdullah al-Mouallimi, the Saudi Ambassador to the UN, said on Monday that the row with Tehran “should have no effect” on attempts to end the wars. “We will continue to work very hard towards supporting the peace efforts in Syria, in Yemen, wherever there might be a need for that,” he said.

“How is that going to affect the behaviour of Iran, we do not know, you will need to ask the Iranians for that,” al-Mouallimi told reporters in New York, accusing Tehran of not being supportive of attempts to find peace before this latest falling out between the two nations. “They have been taking provocative and negative positions and lines, and as such I don’t think that the breaking of relations is going to dissuade them from such behaviour.”

Earlier, Iran’s foreign ministry said Saudi Arabia was using the attack on its embassy in Tehran as a pretext to fuel tensions. “Iran … is committed to providing diplomatic security based on international conventions. But Saudi Arabia, which thrives on tensions, has used this incident as an excuse to fuel the tensions,” Hossein Jaberi Ansari, Iran’s foreign ministry spokesman, said in televised remarks on Monday.