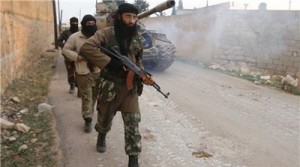 At least 63 people, including nine children, have died in air strikes believed to have been carried out by Russian warplanes on a town in eastern Syria, the Syrian Observatory for Human Rights has said. The raids on Khasham near the city of Deir Az Zor on Saturday were among a series of strikes that also hit two other towns in the past 48 hours, killing scores of people, the monitoring group said on Sunday.

Russian jets have been bombing around Deir Az Zor as Syrian pro-government forces clash with Islamic State of Iraq and the Levant (ISIL) fighters, who control most of the province.  The group has besieged remaining government-held areas of the city since last March and last week launched new attacks.

The strikes on Deir Az Zor come as forces belonging to President Bashar al-Assad’s troops, backed by Russian strikes, recaptured a town from a loose coalition of rebels in the western coastal province of Latakia on Sunday. The advance in Rabiya, reported by both government media and opposition activists, paves the way for a push by pro-government forces right up to the Turkish border.