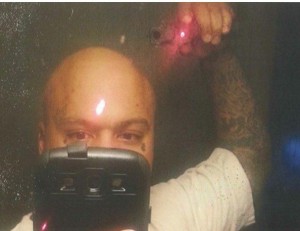 This Facebook post incident am about to discuss  has shown that there is no hiding place on the internet. We  on the social media, are just like the gold fish that has no hiding place. Most people just can’t learn and know that there is no dark alley in the internet to conceal who we are, where we are and sometimes what we even do. Most often you find people spewing indicting and dangerous statements on the social media ignorantly, thinking nobody knows them or even know where to get them if need be.

In some developing nations for now, it is still a bit difficult but not in technologically advanced countries. Marvin Buckles a.k.a Allah Farrad is a victim of an indicting Facebook post that is landing him a 15-year jail term. BGR News reported that Farrad was sentenced on Thursday to 188 months in a Tennessee federal prison because of his 2015 conviction of being a felon in possession of a gun.

He was last convicted for possessing gun and dealing on drugs in year 2000 after the police found out that he possessed the said items. After Farrad served his sentence, he was released from the prison. But before that 2000 sentence, the Knoxville News Sentinel reports  that Farrad had a history of long arrest and convictions that began at age 14.

Perhaps, if Farrad had not posted evidence of his Gun possession onFacebook, I guess the authority wouldn’t have had any clue that  he was still in possession of such exhibit  on him. It is important to state that in advanced countries, while people are investigated, they may not even be aware that they were been checked on by criminal intelligence  team. So was the case of Farrad who at the time posted his picture(above)  that showed him holding a .45-caliber pistol and aiming the reflection of its laser sight at his own forehead not knowing the Federal Bureau  of Investigation(FBI) were  already investigating him for what they call “illicit conduct” and digging through his social media profile account and communications.