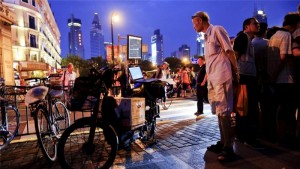 Oil prices have fallen below $30 a barrel, a new 12-year low, amid renewed concerns of slow growth in China – the world’s second largest economy. The oil price had briefly fallen below $30 previously on Tuesday. On Friday, US crude futures were 5.45 percent lower at $29.50 per barrel, while the March Brent contract was down 4.4 percent at $29.52 a barrel.

Global markets sank on Friday after China’s Shanghai stock index dropped to its lowest level in more than one year. The Shanghai Composite Index finished at 2,900.97, down 3.6 percent, its lowest close since December 8, 2014.

China’s official Xinhua News Agency reported that banks’ new yuan loans during the last month fell compared with a year earlier, in a sign that momentum for the credit that fuels economic growth was slowing.

Hong Kong’s benchmark stock index closed at its lowest level in nearly three and a half years on Friday. Al Jazeera’s Rob McBride, reporting from Hong Kong, said: “The bears are predicting that it could in fact still fall further.”

Our correspondent added that China GDP figures for the last quarter of 2015 are likely to show a slowdown. “The big question for [Chinese] authorities is, will they allow that slowing process a soft landing or a hard one? On evidence from the past couple of weeks, things are starting to feel very bumpy right now.”