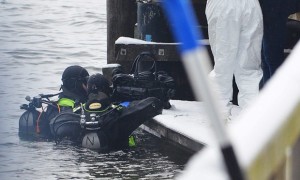 A man strangled and dismembered his wife, encased her head in concrete and then used the concrete block as a weight to drown himself in an Austrian lake, police have said. Officials said the couple were a 72-year-old man and his 71-year-old wife from near Frankfurt in Germany, but did not identify them further.

The corpse and the bag were recovered by police divers from the waters of Traunsee on Monday. A day earlier, two suitcases containing the woman’s remains were found floating close to the lake’s shore near the town of Gmunden.

Postmortem examinations suggested that the woman was strangled between 25 December and 1 January and that the man drowned some time later. There was no indication of involvement by a third party.

“We believe first and foremost that [the man’s death] was suicide,” state prosecutor Birgit Ahamer said.