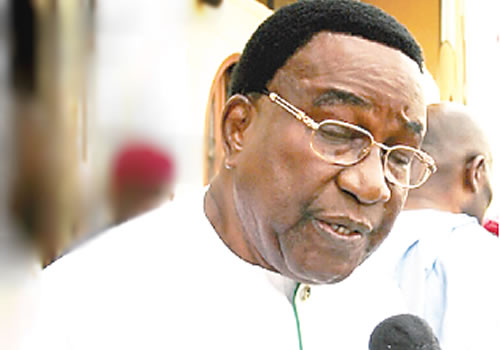 The South East zone of the All Progressives Congress, APC, has disowned the leader of the APC Leadership Caucus, Osita Okechukwu, in the zone for his scathing remarks on the defection of Chief Jim Nwobodo into the party, saying that APC can “conveniently accommodate everyone”.

Mr. Okechukwu had told Punch on Monday that the former governor of old Anambra State, defected to the APC to avoid justice due to his connection to the $2.1 billion arms deal fraud.

“Political parties are like churches and mosques; they have open entry. However, there is the need to sieve the defectors. Is it not a paradox that those who are fingered in the Dasukigate scandal, people who rigged and mangled the 2015 general elections, are today wearing the badge of virtue and principle?” he queried.

However, a statement by the Publicity Secretary of the party in the zone, Mr. Hyacinth Ngwu said: “The attention of the APC, South East zone has been drawn to comments credited to a certain Osita Okechukwu, wherein he purported to be speaking as spokesman for the APC South East Leadership Caucus.

“The said Osita Okechukwu in the statement under reference took the liberty to cast aspersion on the action and person of eminent citizen and statesman in the person of Senator Nwobodo, who joined our great party recently from the Peoples Democratic Party, PDP.

“Perhaps there would have been no need to revisit his personal opinion, if he had not claimed to be the ‘spokesman of the South East Leadership caucus of APC’, a position clearly nebulous and structurally non-existent in APC’s Constitution (October 2014 as amended)

“The APC constitution in Article 12.6(v) recognises the position of a zonal publicity secretary and Hycienth Ngwu is the officer currently vested with the office. It is obviously anti-party and uncharitable for Osita Okechukwu to invent a dubious self-serving platform, appropriate and use same to sabotage and bring the party into hatred, contempt, ridicule and disrepute.

“APC South East heartily welcomes political defectors into our fold. APC is a big party and can conveniently accommodate everyone”.