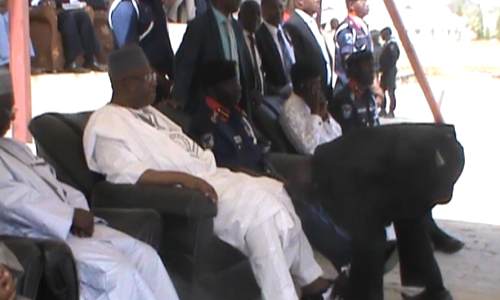 The last has not been heard of the episode involving the Minister of Interior, Abdulrahman Dambazau and his State Security Service orderly, who was recorded on video cleaning his shoes at a public function recently as the Nigeria Security and Civil Defense Corps, NSCDC, has waded into the debate.

In a 30-second video clip, the armed SSS detail was seen cleaning the dirt off Mr. Dambazau’s shoes when he attended an event at the NSCDC Academy in December.

Mr. Dambazau, whose ministry covers the NSCDC, police, customs, immigration and prisons, came under fire from Nigerians as the video went viral.

A group known as the North-east Youth Peace and Development Empowerment Initiative, NEYPDEI, had exonerated the Minister, saying those criticizing him for allowing his security detail clean his shoes in public were ignorant.

Joining the fray, the spokesman of the NSCDC, Okeh Emmanuel, justified the action of the security personnel and also absolved Mr. Dambazau of blame.

“However, the news being peddled by some online media houses, alleging that the Honourable Minister of Interior LT. General Abdulrahman Dambazau (rtd) converts SSS officer to a ‘shoe shiner’ is baseless, fraudulent and malicious.

“It is a diversionary tactics of the evil ones to cast aspersion on the personality of the minister.

“The honourable minister, who was on a visit to NSCDC facilities at Sauka, never beckoned on any of his aides to come and clean his shoe as alleged.

“Rather, if the ‘aide’ carried out such a function, it means it was done voluntarily without any iota of compulsion.

“The demonstration by the SSS personnel was a mark of respect for his principal since he was not compelled to do so.

“It should also be noted that a man of the calibre of the minister, who was a one-time Chief of Army Staff is entitled to aides that could help in ensuring that he looks neat at all times”, said Mr. Emmanuel.

The statement also said Mr. Dambazau is currently on a “working visit to the North-East to assess the condition of the affected victims of insurgent attacks presently at the Internally Displaced Persons (IDPs) camps in Borno, Yobe and Adamawa States”.