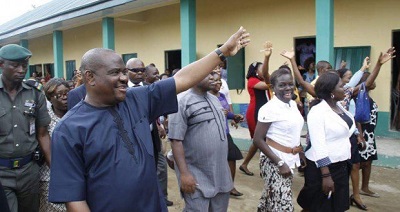 With the issue of litigation surrounding the Rivers State governorship election laid to rest on Wednesday by the Supreme Court, Governor Nyesom Wike, has said his victory will lead to greater delivery of democracy dividends in the state.

Immediately after Wednesday’s judgment by the apex court, which validated his victory in the April 11, 2015 governorship election, Wike trekked on major streets of Port Harcourt, the state capital in a show of appreciation to the residents before returning to the Government House.

During the trek, he was greeted by joyous people.

Speaking to reporters, Gov. Wike said that his victory at the Supreme Court is for the rule of law and the people of Rivers state.

He noted that the apex court’s judgment was a victory for democracy and a confirmation that the will of God would always prevail over the machinations of men.

The Rivers governor noted that the judgment that validated his election was a confirmation of the mandate freely given to him by the people.

He, therefore, extended a hand of fellowship to the governorship candidate of the All Progressives Congress (APC) in Rivers, Dr. Dakuku Adol Peterside, urging him to join hands with his administration to develop the state.

Wike lauded the APC flag bearer for having faith in the judiciary, rather than resorting to violence.

He also assured that Rivers people would continue to benefit from the pro-people projects and programmes of his administration.