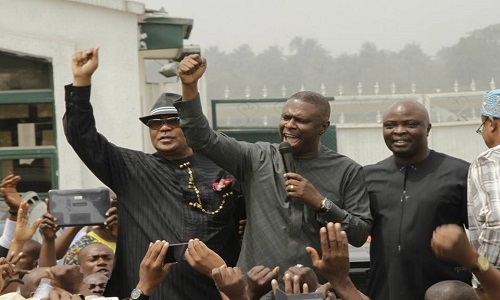 Dr Dakuku Peterside, governorship candidate of the All Progressives Congress (APC) in Rivers, says the Supreme Court judgment has not dismayed the party.

Peterside made this assertion at a reception by his supporters at the Port Harcourt International Airport on Saturday.

The News Agency of Nigeria (NAN) reports that the Supreme Court recently upheld the election of Gov. Nysome Wike of PDP which was nullified by the Court of Appeal.

“I want to pay special tribute to you.

“Never before in the history of this state have we got a set of men and women, so determined to change the course of things as we currently have.

“The highest court in the country has given its judgment but know that your hopes are not dashed ultimately, you will triumph over your enemies”, he said.

Peterside said the party had given God glory and were not deterred or dismayed with the judgment of the court.

He said the APC had accepted the verdict of the apex court, even though it had some reservations, but do not have alternative.

“We know that the blood of all the people that were killed on April 11, 2015 will cry for justice and God will surely give his final judgment.

He said God would be with the party as it faces the challenges ahead because it was fighting a just course to liberate Rivers people.

He urged members of the APC and his supporters to remain peaceful, law abiding and should not resort to violence.

“We congratulate our friend Gov. Wike, but we will constructively criticise policies of the state government that is anti-people with courage and passion.

“We have already offered to help him work for peace and development of the state, and in doing that, we will serve as the conscience of Rivers people and government”.