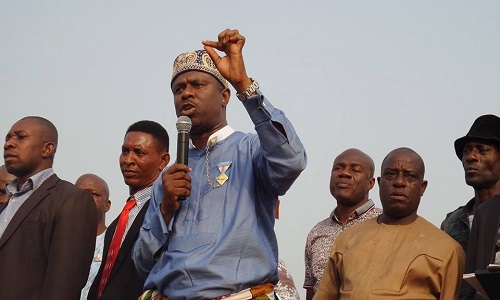 Governorship candidate of the All Progressives Congress (APC) in the 2015 general elections in Rivers State, Dr. Dakuku Adol Peterside, has said he will creatively offer help to the administration of Governor Ezebunwo Nyesom Wike, through the provision of virile opposition.

Peterside, made this known in a statement issued in Port Harcourt, the state capital on Thursday in reaction to yesterday’s judgment by the Supreme Court, which validated the election of Wike as governor of Rivers State.

He said, “Consequently, we shall do our best to work for the peace and development of Rivers State and all who reside in it. We shall creatively offer our help to Governor Nyesom Wike. We will provide a virile opposition, serving as a mirror for the conscience of government, in the interest of Rivers people.

“When encouragement is needed towards a just and proper course of dealings, we will offer our commendation to the government. Conversely, we will constructively express objection to policies and actions we consider inimical to the overall interest of Rivers people.

“It is our hope that Governor Wike and his team will appreciate the suggestions and proposals that would be made in the interest of Rivers people. If we sometimes sound strident, he should pay heed to the message of passionate and zealous Rivers people rather than dismiss the messenger”.

Peterside, a former member of the House of Representatives, stated that there is the need not to allow the country’s electoral process to be subject to the decision of antidemocratic elements, especially those who he said deploy their personal armed groups to molest and kill voters.

He said, “Although we have accepted the Supreme Court verdict, it would be remiss of me not to point out that this is also an opportunity for our people to engage in deep introspection on the electoral process. Beyond party affiliation, must we continue to allow the electoral process to be subject to the whims and caprices of anti-democratic elements, especially those who deploy personal militia to molest and even kill voters.

“Those who hold the electoral umpire captive or compromised; and thus generally prevent electoral outcomes reflective of the will of the voters, as envisaged by law? It is understandable that an attitude of cynical expediency in some politicians may inevitably conclude that ‘the end justifies the means’.

“However, those who are governed by such a cynical mentality need to be reminded that a huge moral burden would perpetually sour such temporary ‘victories’. Like the myth of Sisyphus, it is surely a backward slide in our political evolution. Let us think deeply please”.