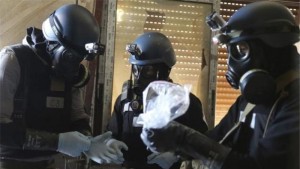 The deadly nerve agent sarin has possibly been used in Syria, the United Nations acting disarmament chief has told the UN Security Council. Kim Won-soo spoke to reporters on Tuesday after briefing the Security Council behind closed doors on the latest report from the Organisation for the Prohibition of Chemical Weapons (OPCW). Aljazeera reports:

The report said OPCW investigators – who looked at 11 allegations of chemical weapons use – came across one instance of blood samples indicating “that individuals were at some point exposed to sarin or a sarin-like substance.” “Further investigation would be necessary to determine when or under what circumstances such exposure might have occurred,” the report said.

The OPCW only carries out fact-finding missions, but the Security Council in August established an expert team that will seek to assign blame for chemical attacks in Syria’s war. OPCW spokesman, Malik Ellahi, said there hasn’t yet been a decision taken on which body should conduct further investigation into the blood samples.

The opposition Syrian National Coalition has urged the OPCW to investigate an alleged chemical attack last month in the Damascus suburb of Moadamiyeh – an area besieged by government forces. The opposition blamed President Bashar al-Assad’s regime, but the Syrian government denied that and blamed rebels and the Islamic State of Iraq and the Levant.