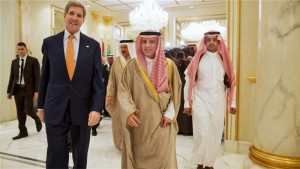 US Secretary of State John Kerry on a visit to Saudi Arabia has sought to curb concerns from Gulf Arab allies over an apparent thaw in relations between the United States and Iran. Kerry spoke on Saturday in Riyadh after meeting his Saudi counterpart Adel al-Jubeir and other foreign ministers from the six-nation Gulf Cooperation Council.

He also held talks with Saudi’s King Salman and the monarch’s son, Deputy Crown Prince Mohammed bin Salman, who is also the defence minister. “The United States remains concerned about some of the activities that Iran is engaged in in other countries,” Kerry told reporters, citing as an example Iran’s “support for terrorist groups like Hezbollah” in Lebanon.

Saudi Arabia and its Gulf neighbours perceive a lack of US engagement in the region, particularly in the face of what they see as Iran’s “interference” in Yemen, Syria, Lebanon and elsewhere. Those sentiments reached a new level after the historic international deal which this month lifted crippling economic sanctions on Iran in return for a scaling back of its nuclear capabilities.

Kerry has long sought to calm concerns among his Gulf allies about the overtures to Iran, one of the Middle East’s leading powers whose relations with its regional rival, Saudi Arabia, have worsened this month. Saudi Arabia and some of its allies cut diplomatic ties with Iran after protesters set fire to Riyadh’s embassy in Tehran and at a consulate in the second city of Mashhad.