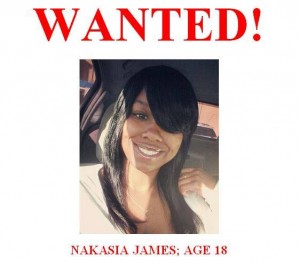 Authorities in California are searching for an 18-year-old woman who allegedly stabbed her boyfriend to death and posted a confession on Facebook. Nakasia James has been on the run since Monday, shortly after she allegedly posted a status update to Facebook, which read, in part: “Just goin tell ya nw be4 I get caught. … We was really fightn and I gt the knife and stabbed him ddnt think I would hurt him BT I did he died and I’m on the run.”

In the post, James allegedly accused her boyfriend, identified by police as 21-year-old Dorian Powell, of punching her “in my eyes.”  The Facebook post stated James is on the run and “pigs lookn for me.”

San Bernardino police spokeswoman Eileen Hards told Los Angeles KABC-TV, “investigators have been monitoring her Facebook page and did see several of the posts that she made.” The Facebook account has since been disabled. According to San Bernardino police, Powell’s body was found inside a Central Avenue apartment early Monday after someone placed a 911 call requesting assistance. His injuries, police said, were consistent with a stabbing. Authorities have deemed his slaying a homicide.