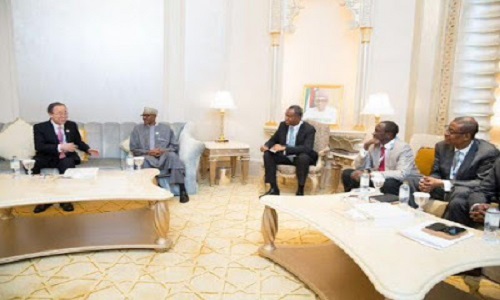 President Muhammadu Buhari Monday said since assuming office about eight months ago, Nigeria has made appreciable gains towards ending the Boko Haram insurgency.

Buhari, who made this known during a meeting with Secretary-General of the United Nations (UN), Mr. Ban Ki Moon on the sidelines of the World Future Energy Summit in Abu Dhabi, said in collaboration with the Multinational Joint Task Force, the Nigerian Armed Forces have forced the insurgents to beat a retreat from Nigerian territory into what he called “fall-back positions”.

In a statement by his Special Adviser on Media and Publicity, Femi Adesina, the president said: “They are currently not holding any territory today as we speak”.

He told Mr. Ki Moon that Nigeria would persistently pursue global action to reverse the drying up of Lake Chad and save the lives of those who depend on it for survival.

The United Nations Secretary-General in his response, hailed the president for his courage in fighting terrorism and corruption, noting that Nigeria has made amazing progress against terrorism since the he (Buhari) assumed office.

He added that Buhari’s war against corruption has boosted global confidence in the Nigerian economy.

He, however, urged the president to integrate the UN Sustainable Development Goals into Nigeria’s economic and environmental vision.