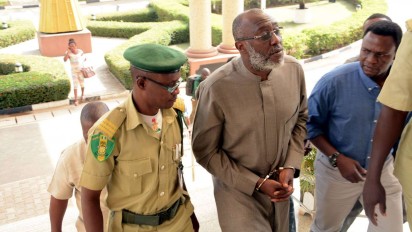 The Nigeria Prisons Service yesterday explained that the decision to handcuff the National Publicity Secretary of the Peoples Democratic Party, Chief Olisa Metuh while appearing for his trial at the Federal High Court in Abuja on Tuesday, was at the discretion of the prison officer, who supervised his court appearance.

The spokesperson for the service, Francis Enobore, who was responding to reactions that trailed Metuh’s appearance in court wearing handcuffs, said the officer in charge of the escort that took the PDP chieftain to court was at liberty to determine if the inmate should be handcuffed based on security situation, the environment and intelligence report made available to him.

It would be recalled that Metuh, who is standing trial on seven count criminal charges brought against him by the Economic and Financial Crimes Commission, EFCC, Metuh, was on Friday remanded in Kuje Prison by Justice Okon Abang.

On the resumed hearing for his bail application, the PDP chieftain was transported by prison officials to court in handcuffs, a development that led the PDP and a cross-section of Nigerians to allege that the move was a ploy by the All Progressives Congress government to muzzle the major opposition party in the country.

Responding to allegations that the NPS was doing the bidding of the Presidency, Enobore stressed that Metuh was not maltreated in any way, explaining that handcuffing an inmate was a standard procedure, which the prison warden could employ based on the situation at hand.

He said, “Handcuffing an inmate is at the discretion of the officer in-charge, depending on the security situation, the environment and intelligence report available to the officer. Sometimes they look at the atmosphere and take the necessary decision.