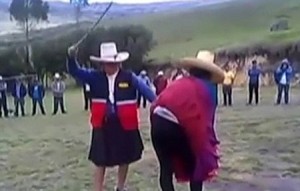 A woman in Peru was publicly whipped by village elders for cheating on her husband with her own nephew while her husband was away working in Spain.

The accused woman allegedly seduced her 20-year-old nephew before finally having sexual intercourse with him. She was pictured being flogged by a female elder ‘Bend over, stay still!’, shouts her discipliner as she tries to move away from the blows, before another man runs over to hold her in place.

Meanwhile, the 20-year-old nephew was beaten as a burglar as his attempts to save his aunt failed when he ran into the wrong house to save her on hearing that punishment awaits her.

The residents of the house which he ran into caught him and labelled him a burglar. According to one of the young women living in the house, they found the young man on their property at around 5am and beat him up.