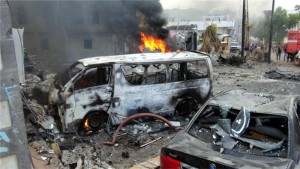 At least seven people have been killed after a car bomb went off outside the presidential palace in the southern Yemeni city of Aden, the local police chief says. Shalal Shaei told Al Jazeera that 15 people were also wounded in Thursday’s blast. The dead included soldiers, he said. An affiliate of the Islamic State of Iraq and the Levant (ISIL) group claimed responsibility for the attack.

In an online statement posted on Twitter by the group’s supporters, ISIL identified the attacker as Abu Hanifa al-Hollandi, an Arabic nom de guerre that suggests he was Dutch. The last name in fighters’ pseudonyms usually indicates their nationality or place of origin. His real name was not immediately known. It was not possible to verify the claim. The group posted pictures that appeared to show the bomber speeding towards cement barricades manned by presidential guards in the Masheeq area.

Officials said that the bombing took place about one kilometre away from the presidential palace. They said that both President Abd-Rabbu Mansour Hadi and Prime Minister Khaled Bahah were inside the palace at the time of the explosion and they were not harmed. The officials spoke on condition of anonymity because they were not authorised to speak to the press. Witnesses said that the bombing was heard across the city and demolished several nearby houses.