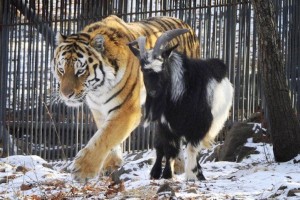 A caged Siberia tiger has surprised the staff at Primorsky Safari Park, near Vladivostok, Russia, after befriending a goat that had been offered to him as live food. That was months ago, and even though everyone thought the friendship wouldn’t last long, the two are still inseparable. O’Central has more:

Up until late November 2015, 3-year-old Amur, one of the last remaining Siberian tigers, had never shown any sign of compassion for the live food, caretakers at Primorsky Safari Park offered him twice a week. He would usually pounce on scared rabbits and goats and kill them with a swift stroke of his paw. But something was different about the goat that was thrown into his enclosure last November. Apparently, no one had taught the goat to be afraid of tigers, so he didn’t just up and run at the sight of Amur. He just stood his ground, which confused the giant feline, who didn’t attack it as he normally did other live prey.

“The tiger was confused and gave up,” explained Dmitry Mezentsev, head of the park. “It happened once before, another goat pushed back and the tiger decided not to eat him, but once he showed weakness—that was it—his predator killed him. The situation now is different and the animals are great friends.”

The goat, named Timur, after the great Mongolian warrior Timur Lenk, started getting close to his new roommate, and Amur didn’t seem to mind too much. To the surprise of everyone at the zoo, they became close friends, walking together, and even playing games of hide-and-seek. “During the day, Amur and Timur walk together like a pair of good friends,” one caretaker said “Timur takes Amur for an alpha male, and follows him everywhere. Timur’s fearlessness and caution have led to such a paradoxical result.”

The unusual relationship had sparked all kinds of reactions, both from animal experts and simple zoo visitors. Vladimir Krever of WWF-Russia, a biodiversity coordinator, thought the friendship would not last very long. “The friendship between the tiger and a goat will be short-lived,” he said, just one week after the encounter took place. “It will last only until the tiger gets hungry.”