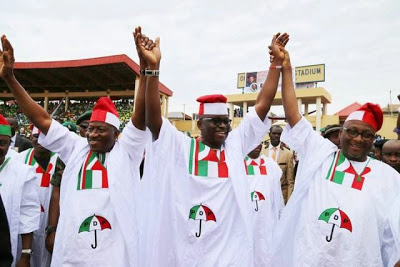 Governor of Ekiti State, Mr. Ayodele Fayose at the weekend described the decision by the Peoples Democratic Party, PDP, to field Dr. Goodluck Jonathan as its presidential candidate in the 2015 presidential election as a “political miscalculation” by the party.

Fayose, who disclosed this in an interview, said the defeat suffered by the PDP could have been averted had the party fielded a northern candidate.

He said: “We lost the election because we did not pick our candidate from the north, not because Jonathan as a person was bad. It was just a political miscalculation. The fact is that my former President, I chose my word, my former President, Goodluck Jonathan, tried his best.

“But if I were him, I would not have contested at all, you understand? Because it is two ways: If he did not contest and the PDP lost out, he will still be an honourable man, and if he had given that opportunity to the north, those who defected from the PDP would not have defected.

“But that is story. Jonathan did his best and I will still continue to support him. You know I was not there when they took the decision about him becoming the flag-bearer, but it doesn’t matter. We can’t all put our mouth inside the soil. Somebody must remain with somebody. I will remain with Jonathan, even if I am the only man standing”.

On what would become of PDP, in view of the 2019 elections, Governor Fayose said though the party was going through challenges at the moment, it could still come out of its present challenge before the next round of elections, stronger.

“Let me explain something to you. When you have an accident, God forbid, you don’t gather momentum immediately. Life is physical, it is normal. What the PDP is going through now is a deliberate effort to destabilize the opposition by the APC and we know that”, he said.

On whether he had his eyes on the Presidency in 2019, the outspoken governor immediately dismissed the idea.

“For which country? Nigeria? Well, I don’t have such an ambition but I know I am going higher. Mark my words, I have said 20 things that will happen in Nigeria and more than seven have come to pass. Check the records”.

On the role played by soldiers in Ekiti and Osun governorship elections, the governor said: “My own is that I have gone through an election. I have won an election. There is a place the law says you can ventilate your displeasure. They have gone to the lower court, the appeal court and the Supreme Court. “The Supreme Court has given judgment in my favour. They have become functus officio. They cannot approbate and reprobate on the matter anymore. The election matters are Suris generis. They operate within the ambit of time.

“Two weeks after the House of Assembly election, I won everything, 26-26. Is it the military again? When the male friend of your mother is more powerful than your father, you call him daddy. You welcome him and take his bag.

“Let them take my bag and accept this Ekiti matter. This Bayelsa election we just finished, 14 people died, how many people died in Ekiti? If you see my prediction about Nigeria under Buhari, I said every effort to forcefully take the South-South states will result in a huge loss of lives.

“They should leave me alone. They should face governance. God has given me this place. No amount of powers will take this place from me because the gift of God is without repentance. How can only me defeat three governors – Segun Oni, Adebayo and Fayemi. I defeated them and they are still complaining”.