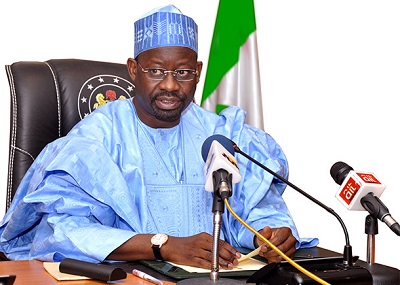 Governor Ibrahim Dankwambo of Gombe State has denied speculations that he is eyeing the presidential ticket of the Peoples Democratic Party, PDP, in 2019.

The PDP has zoned its ticket for the 2019 presidential election to the North.

There were speculations at the weekend that Dankwambo’s alleged endorsement as the presidential candidate of the party was causing strong division in the PDP, especially in the North East geo-political zone of the country.

It was learnt that the division arose as a result of the zoning policy of the opposition party, which will not permit the national chairman and presidential candidate to emerge from the same geo-political zone.

With the PDP set to finally put to rest the controversy surrounding its leadership by selecting a new chairman from the North East this week, some powerful stakeholders of the party, who are said to be backing Dankwambo, are allegedly pushing for the North, especially the North East, not getting the position of national chairman.

According to a source, Dankwambo may be pushing for the Deputy National Chairman and acting National Chairman of the party, Prince Uche Secondus, to retain the party chairmanship, a calculated move that will ensure his rumoured 2019 presidential ambition is kept alive.

But in his reaction, spokesman of the governor, Junaidu Usman, who spoke on phone, noted that Dankwambo, a former Accountant General of the Federation, was yet to express interest in the 2019 race, although he was more concerned about rebuilding a viable PDP.

According to Usman, even though the governor has the credentials to be president, given his outstanding performance as governor, which earned him re-election in the face of President Muhammadu Buhari’s “tsunami” in the North in the last general elections, Mr. Dankwambo has not told anybody that he would run for the office in 2019.

“All I know is Governor Dankwambo, Talban Gombe, is among the leading figures who want the best for PDP. Talban Gombe wants it to stand up to its responsibility of a sound and formidable opposition party”, the spokesman added.