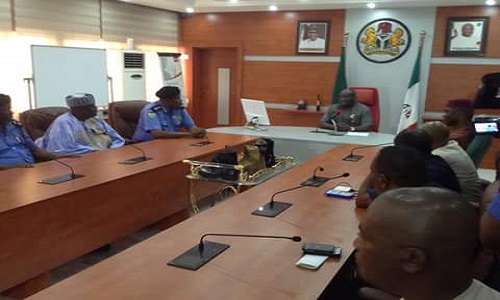 Governor of Abia State, Dr. Okezie Ikpeazu yesterday boosted the fight against crime in the state with a donation of over 20 vehicles fitted with modern communication gadgets to the police.

At a brief ceremony, which held at the Government House, Umuahia, Mr. Ikpeazu handed over the vehicles to the Inspector General of Police, Solomon Arase.

According to the governor, the gesture was to assist the police to effectively combat crime in the state.

Ikpeazu, who expressed worry over the sudden resurgence of criminality, especially kidnapping in some parts of the state, advocat¬ed 24- hour police surveillance of the state to nip crime in the bud.

He also issued quit notice to all criminal elements in the state, warning that his administration will deal ruthlessly with anyone aiding and abating crime in any form.

Gov. Ikpeazu also hailed the efforts of the police and other security agencies in the state in combating crime even as he urged them to redouble their efforts towards ensuring a crime-free Abia.

At the handing over ceremony, the governor also presented samples of paramilitary shoes and belts produced in Aba to the police chief, and solicited his patronage to encourage the local artisans.

Mr. Ikpeazu pointed out that some of the artisans had undergone training in Turkey on perfect finishing of locally made shoes, boasting that Aba-made paramilitary foot wears can compete favourably with similar products produced abroad.

“Patronizing Aba-made paramilitary shoes and uniforms will help rescue our economy and create new jobs for the youths”, Ik¬peazu said.

In his response, Mr. Arase thanked the governor for the gesture, which he said would further enhance the efficiency and performance of the men and officers of the state police command.

The IG also assured that the vehicles would be put to judicious use while appealing to other state governments to other states govern¬ments to also come to the assistance of the police.