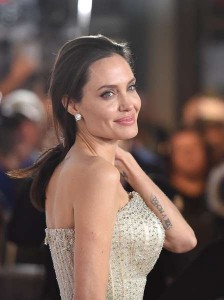 Superstar Hollywood actress and mother of six, Angelina Jolie has revealed she never wanted to be a mother.

Angelina said the idea of having kids only crossed her mind when she was shooting Tomb Raider in the year 2000.

The 40-year-old wife of Brad Pitt was playing with children at a Cambodian school when it became ‘suddenly very clear to me that my son was in the country, somewhere.’

She adopted Maddox in 2002, and a year later opened a foundation in his name in north-western Battambang province, which helps fund health care, education and conservation projects in rural Cambodia.

It was recently revealed that Angelina, husband Brad Pitt and their six children will be moving to London in March and would stay for at least six months as the actor gets ready to shoot his sci-fi thriller, ‘World War Z 2’.

The Oscar winner is currently in Cambodia to direct her next film, ‘First They Killed My Father’, based on a Khmer Rouge memoir written by survivor LoungUng that recounts the 1970s Cambodian genocide