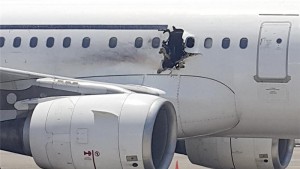 Al-Shabab has claimed responsibility for a purported bomb attack on a passenger plane in Somalia earlier this month, saying it was targeted at Western officials and Turkish NATO forces. The blast punched a one-metre-sized hole in the side of the Airbus A321 about 15 minutes after it had taken off from Mogadishu heading for Djibouti on February 2.

A senior source within the group told Al Jazeera that their initial target was a Turkish Airlines jet, but only attacked Daallo Airlines after Turkey’s national carrier cancelled its flight to the Somali capital. In a statement obtained by Al Jazeera, the armed group said on Saturday the attack on the Daallo Airlines flight was part of an operation targeting dozens of Western intelligence officials and Turkish NATO forces.

It added that while the operation did not bring down the plane, “it struck terror in the hearts of the crusaders, demonstrating to the disbelievers that despite all their security measures and the strenuous efforts they make to conceal their presence, the Mujahideen can and will get to them”.

Al-Shabab said the operation was “retribution for the crimes committed by the coalition of Western crusaders and their intelligence agencies against the Muslims of Somalia”. Al-Shabab is fighting to overthrow Somalia’s government and establish a state based on its interpretation of Islamic law.