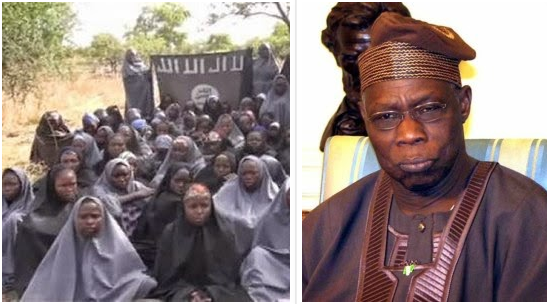 Former President Olusegun Obasanjo has described as lies, any assurances by the Federal Government that it would rescue the abducted Chibok girls alive.

Obasanjo expressed this view at an event organized by the Staff Club of the Obafemi Awolowo University, Ile-Ife, on Friday.

The Chibok girls were abducted by Boko Haram insurgents in their hostel at Government Secondary School, Chibok, Borno State on April 14, 2014. It is believed that at least 219 of the school girls are still in captivity.

Speaking at the event tagged “An Evening with Obasanjo”, which was held at the open arena of the staff club, the former president blamed former President Goodluck Jonathan for trivializing the distress call to rescue the girls on the day they were captured.

“The former president heard about the kidnap 8am in the morning of the abduction but failed to act until 72 hours later and by then it was too late”, Mr. Obasanjo stated.

“Anyone saying they (Chibok girls) will return is telling lies, maybe some of them will return to tell their story”.

According to him, the failure of the Peoples Democratic Party in the last presidential election was necessary for Nigeria to be saved.

“We tried, but with Jonathan, it was best that PDP should fail to save Nigeria”, Mr. Obasanjo said.

He pointed out that one of the low points of the Jonathan administration was his treatment of issues of importance as politics, particularly that of Boko Haram.

On power generation, Mr. Obasanjo, whose administration sunk about $16 billion in the sector, said there had been no meaningful improvements since he left office nearly nine years ago.

“Power is still the same way I left it in 2007, railway is same way and other sectors, it was best that PDP stopped ruling us”, he said.

“It was a thing of joy to me that the earlier declaration of 50 years governance for PDP did not come to pass”.

Mr Obasanjo, who was in company with the Vice-chancellor of the University, Professor Fadipe and other notable personalities, also justified some of the decisions he took on education, saying he would take the same decisions if he could do it all over again.

“I have no regrets regarding the decisions I took in terms of education including removing free food in our institutions. We had 53 institutions when I came in 1999 but as at the time I left we had 150 institutions”, Mr Obasanjo explained.

“I prefer to have all persons in schools than to have some few persons simply enjoying free food”.

Mr. Obasanjo, who was brought out from prison to contest for president in 1999, claimed he never had a godfather, admonishing young politicians to shun godfatherism and be ready to face hard times in politics.