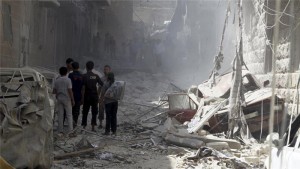 Syria’s Bashar al-Assad is “deluded” if he thinks his forces will retake all of the country from rebel fighters, the US said, after the president claimed in an interview that victory was just a matter of time. While vowing to win the war, Assad said the involvement of regional players in the conflict would mean “the solution will take a long time and will incur a heavy price”.

“We have fully believed in negotiations and in political action since the beginning of the crisis, however, if we negotiate, it does not mean that we stop fighting terrorism,” Assad told the AFP news agency in an interview published on Friday. “The two tracks are inevitable in Syria: first through negotiations and second through fighting terrorism.”

Assad’s comments came as world powers agreed on a “cessation of hostilities” on Friday in an attempt to halt the nearly five-year Syrian war that his killed an estimated 250,000 people and driven millions from the country. The agreement falls short of a formal ceasefire, since it was not signed by the main warring parties – the opposition and government forces.

The United States reacted to Assad’s interview with disdain on Friday.    “He’s deluded if he thinks that there’s a military solution to the conflict in Syria,” deputy State Department spokesman Mark Toner told reporters. “All we’re looking at – if the Syrian regime continues the fighting – is more bloodshed, more hardship and, frankly, a greater hardening of positions on either side.”