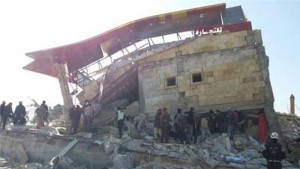 France and Turkey have called the bombing of two schools and five hospitals in Syria “war crimes”, while hopes for a ceasefire faded as President Bashar al-Assad played down prospects of a truce. Up to 50 civilians, including children, died when missiles hit at least five medical buildings and two schools in the Aleppo and Idlib provinces on Monday.

UN Secretary said the raids violated international law and “cast a shadow” over efforts to end Syria’s five-year civil war. He did not say who was responsible for the attacks but groups monitoring the conflict suspected the strikes were carried out by Russia, an ally of the Syrian regime.

Russia’s health minister, Veronika Skvortsova, denied Moscow was responsible, saying its military had targeted Islamic State of Iraq and the Levant (ISIL) infrastructure and that she had no reason to believe it had bombed civilians. “We are confident that [there is] no way could it be done by our defence forces. This contradicts our ideology,” she said.

French Foreign Minister Jean-Marc Ayrault said attacks on health facilities in Syria by the regime or its supporters were “unacceptable and must stop immediately”. Turkey on Monday separately accused Russia of “an obvious war crime” and warned that there would be consequences if Russia did not immediately end such attacks. Syria’s ambassador to Moscow, Riad Haddad, said the hospital had been targeted by a US raid.