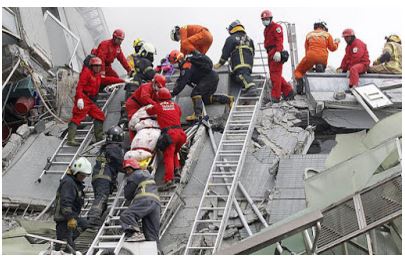 A six-month-old baby girl who was rescued from the rubble of a collapsed building in Taiwan after spending 30 hours underneath it has been reportedly rushed to the hospital.
Rescuers in Taiwan raced on Sunday to save more than 120 people still trapped under the rubble of a building after it collapsed during a powerful earthquake.

Emergency workers worked around the clock to comb the ruins of the 17-storey building in southern Tainan city following a 6.4 magnitude earthquake in the early hours of Saturday.

As rescue operations continued, the death toll from the earthquake rose to 28, with most victims – including a ten-day-old baby girl – killed in the ill-fated Wei-guan Golden Dragon Building.
The collapsed building was home to 256 residents.
Anxious relatives gathering near the rescue operations included a woman who called herself Chang, 42, who described how she was waiting to hear from her 24-year-old daughter who lived on the fifth floor. 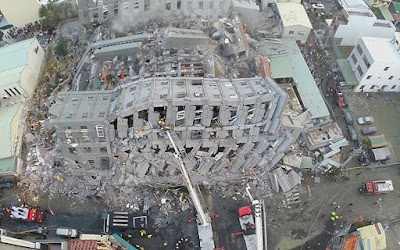 “She’s not answering my phone calls,” she said. “I am trying to hold my emotions and stay strong. I’ll do that until I find her.”

“We’ve also commissioned three independent bodies to preserve evidence during the rescue so we can assist the residents if they want to file lawsuits in the future. We will hold the builder responsible if they have broken the law.”

Yueh Chin-sen, whose mother-in-law’s family of eight was still trapped, described how residents had long complained of defects in the building.

“They complained that the building wasn’t well constructed as there were cracks in the walls and tiles fell off after several quakes in recent years,” he told AFP.

“I hope the government will prosecute the builder on criminal charges as people lost their lives.”

Taiwan, which is located in a seismically active Pacific Ring of Fire zone, was hit by a major 7.7 magnitude earthquake in 1999 which claimed more than 2,400 lives.