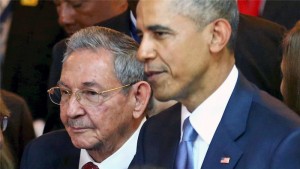 Barack Obama, the US president, is planning an historic visit to Cuba next month, which will make him the first serving US president to step foot on the island in nearly nine decades. Obama’s visit in mid-March will be part of a broader trip to Latin America that the White House will announce on Thursday, Obama administration officials told news agencies.

Obama and Cuban President Raul Castro announced last year that they would begin normalising ties after a half-century of Cold War opposition. On Tuesday, the two nations signed a deal restoring commercial air traffic for the first time in five decades.

Immediately after signing the commercial flights deal, the US Department of Transportation opened bidding by American carriers on as many as 110 US-Cuba flights a day — more than five times the current number. All flights currently operating between the two countries are charters. Obama’s government is eager to make progress on building trade and diplomatic ties with Cuba before he leaves office. A normalisation of US-Cuban relations had seemed unthinkable to both Cubans and Americans for generations.

In August Havana and Washington formally renewed relations and upgraded their diplomatic missions to embassies. The presidents of the US and Cuba earlier last year met in Panama City, with Obama announcing a thaw in relations by saying “the Cold War is over”.