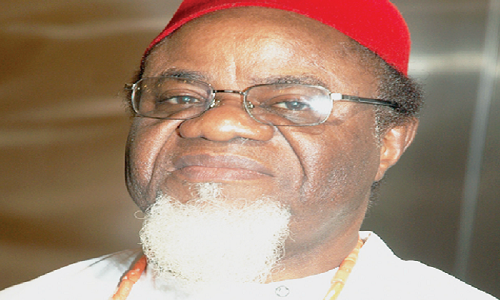 A former governor of old Anambra State, Dr. Chukwuemeka Ezeife, has accused President Muhammadu Buhari of waging another war against the people of the South-East geo-political zone.
The Harvard-trained economist described the president’s ill-treatment of the region as a continuation of the 1967-1970 Nigerian civ¬il war, of which Buhari, then a military officer, was a key player.
The ex-governor, however, warned South Easterners, especially, pro-Biafra agitators, against resorting to self-defence against the country’s security forces.
Ezeife, who made this known in a statement on pro-Biafra agitations on Thursday, said that indulging in self-defence, as advocated by some members of the Indigenous Peoples of Biafra (IPOB) is not only senseless, but also an invitation to the military and police to decimate Ndigbo’s youth population.
“At this stage, it does not make any sense to talk about self-de¬fence. If (armed) self-defence is at¬tempted, it can only lead to more de¬population of South East youths”, the elder statesman said.
“Buhari will continue fighting Bia¬fra or now, Ndigbo – for as long as God gives him breath. Let us not give him any semblance of excuse or justifica¬tion; let us not give him the opportu¬nity to further slaughter our youths. Thinking persons should, in the cir¬cumstance, see any effort at self-de¬fence as suicidal!” he added.
Reacting to a recent statement credited to Buhari that Nigeria/Biafra war con¬tinues, Ezeife said such utterance re¬moved “doubts about the president’s disposition to the South East”, adding that what this implies to the president and “others like him” is that depopu¬lating the South East remains a legit¬imate strategy.
He said: “This means that reduc¬ing the population of the South-East remains a legitimate strategy. The war continues for as long as those like him, who fought in the war, remain alive. Thus, we must take, as war dead, the casualties at the Aba School Com¬pound, days ago, where unarmed members of Indigenous Peoples of Bi¬afra (IPOB), were gathered and were dealt with: 50 persons in all, with 10 dead on the spot.
“We have no way to know yet how many of the wounded have died. One wonders whether, even in wars, there are no rules of engagement.
“Armed policemen and soldiers, shooting-to-death innocent or, at least, unarmed individuals, can only be seen, properly, as crime against hu¬manity, even worse than pogrom!!! Body language may be more com¬manding than express orders or com¬mands!!!”
While commending IPOB leaders for doing the right thing by taking the Biafran cause to the United Nations (UN), Ezeife listed the circum¬stances which gave birth to the agita¬tion for Biafra as the absence of South Easterners in President Buhari’s first 40 appointments.
He named other ‘sins’ of the Buhari administration against the South East as the removal of the appointment of an Igbo in NIMASA three days after announcement; failure to appoint a South East person to even the sixth and least protocol position in govern¬ment in a six geopolitical zone struc¬ture like the position of the Secretary to the Government of the Federation (SGF); absence of any Igbo person in the National Security Council and dumping other dangerous Boko Har¬am prisoners in Ekwulobia Prison, in Anambra State despite massive pro¬tests from the people.
Others, according to him, are the president’s failure to give key ministries to the South East persons; spilling the blood of Eastern youths, the most re¬cent in Aba; imputatively disrespect¬ing the rule of law by the continued detention of Nnamdi Kanu after a court of competent juris-diction had ordered his release on bail; the body language of undisguised hatred for Igbo demonstrated through the recent handcuffing of Olisa Metuh, while other accused persons, whose cases were more heinous, were swagger¬ing into the court.
He added: “These are the ingredients of injustice, mar¬ginalisation and humiliation which can make life not worth living for an Igbo man in Nigeria. They are signs of the Igbo being rejected in Nigeria.
“These are the reason why I said that Buhari is stok¬ing the fire of MASSOB and Biafra and pushing the South East out of Nigeria. For as long as they persist, Biafra is in¬evitable. No two ways about it!!!”