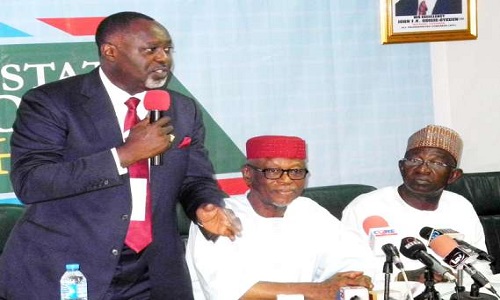 The All Progressives Congress (APC) says the ongoing anti-corruption war by President Muhammadu Buhari is not hindering governance.

The National Auditor of the party, Chief George Moghalu‎, made this known to newsmen in Abuja on Wednesday. ‎

Moghalu insisted that other aspects of governance were being addressed.

‎He also dismissed insinuations in some quarters that the fight against corruption may affect the fortunes of APC in future elections.

According to him, the party will not spend its first tenure fighting corruption.

“I want to disagree with such insinuations. We are not going to spend the four years in fighting corruption. As you know, corruption is being fought and it is fighting back.

“In the same vein, other aspects of governance are being addressed; governance has not stopped in any sector because Mr. President and his government are confronting corruption frontally.

“Governance is running side by side with the fight against corruption.

On the party’s eight-month reign, Moghalu blamed the seeming slowness of the Buhari administration on the decay inherited from the previous government.

“We are very much on course. You see, when we talk about these eight months, we must also consider the level of decay, the level of rot that the APC government is confronted with.

“It will be most unfair for anybody to expect that the rot and damage to the economy, to the Nigerian state, to infrastructure and everything will be repaired in eight months.

“It is not fair to the government. ‎We all know from what we are seeing and hearing, the quantum of damage is unimaginable.

“So, we need to give the government all the support, encourage government, pray for the leaders so that they will continue in the part they are following.

“If you look at it, there is a methodical commitment to actually set objective and that objective which I know is to implement the APC manifesto which is well written and a collection of the reaction and expectations of the people.

“And once that is implemented, I guarantee you that Nigeria will get back on course”.

The national auditor of the governing party also appealed to Nigerians to be patient with the government and assured that soon, they would have no choice than to praise the Buhari-led administration.

Moghalu said: “My appeal is that we should be patient. We are almost there, it can’t be worse.

“Let us be a little bit patient, support government in prayer and by any means we can, so that government can remain on course.

“I am confident that with what has happened and the target they have set for themselves, I am certain that we will soon get to our destination”.

Resist Those Trying To Cause Confusion In The Country, Buni Tells APC Youth