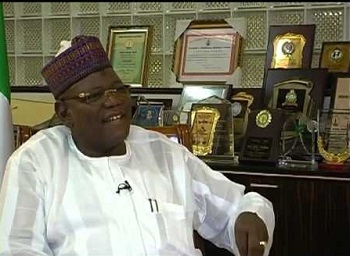 The immediate past governor of Jigawa State, Sule Lamido, on Wednesday, rubbished the President Muhammadu Buhari-led All Progressives Congress, APC, government’s change mantra.
Lamido noted that with over 80 per cent of APC members formerly belonging to the Peoples Democratic Party, PDP, Nigerians should not expect anything exceptional from the Buhari administration.
He also stated that with the caliber of PDP defectors, who were at present occupying various positions in the present government, it would be difficult for President Buhari to fulfill the promises he made to Nigerians because they (defectors) joined the APC to achieve their personal ambitions.
According to him: “How can President Buhari say he is fighting corruption when he is surrounded by people of questionable characters, a group of people who were part of the government he is criticizing”.
The ex-governor, who spoke while addressing Global Watch members when they paid him a visit in Dutse, the Jigawa State capital, said the problems of Nigeria “Is not only corruption. We as leaders have failed the nation and the ideologies of our founding fathers that fought for our independence. The many years of illegal military regimes and political eras where people joined politics for personal reasons are the bane of our current predicament. Today, the APC government is fighting only PDP members; they are being persecuted for alleged corruption, when there are records that past military administrations who took over government by force and civilian administrations who ruled before PDP also abused their position. The challenge before us is not about politics, it is about the chemistry of our nation. What are we not doing right as a people that needed to be corrected? Unless they are corrected, things will continue to deteriorate”.
Lamido further condemned the APC-led federal government for instilling fear in the minds of Nigerians, stressing that a leader was supposed to make people feel secured not to put fear in them by allegedly detaining people indiscriminately.
“Democracy should be able to address our problems, unite us and not to put fear in the land, compelling people to be pretending to be what they are not because they don’t want to be imprisoned”, he said.
Earlier, the secretary of Global Watch, Yahaya Idris, said they visited the former governor to seek his fatherly blessing in their effort at promoting democracy and unity among the Nigerian youth.