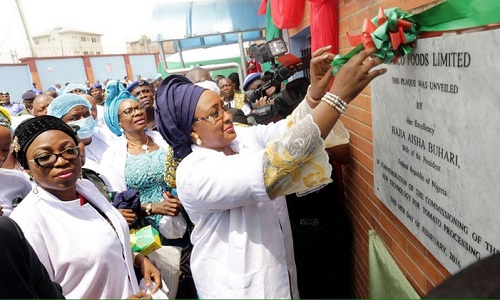 Speaking at the inauguration ceremony, Mrs. Buhari tasked relevant government regulatory agencies to step up actions towards checking the import of foreign and substandard foods into the country to protect local manufacturers and the health of Nigerian citizens.

“I think we have imported enough and we have to change that culture of importing things we can produce locally”, she said in her address.

“This is part of the change we are talking about that must happen in the country. Local food manufacturers have to be encouraged to grow as that is the only way to create employment for the youths and help local farmers to benefit more from their labour. Nigerians must also patronise local companies and their products”, the wife of the president added.

Also speaking at the event, President/CEO of ERISCO Foods, Chief Eric Umeofia, said the new plant was an expansion and improvement on the existing one using the latest technology that allows fresh tomatoes sourced within Nigeria from local farmers to be processed into tomato paste.

According to Umeofia, the idea of the new plant was borne out of the need to resolve the glut in the tomato products from farmers, particularly in the northern part of the country, who are losing about 75 per cent of their produce due to the absence of storage or processing facilities.

“I visited northern Nigeria frequently in the recent past and I saw how more than 75 per cent of tomatoes harvested yearly are being wasted”, Said Umeofia. “Sadly, however, Nigeria spends about $1 billion importing tomato paste from abroad. All that will end with the inauguration of this project. Our new technology in this facility puts an end to all the waste Nigerian farmers are suffering over the years because it is a backward integration project investment we have made for Nigeria”.

“We can now take 10 trucks of fresh tomatoes daily and process the fresh tomatoes to tomato paste and this factory is the first of its kind in Africa”, the ERISCO boss added.

Wife of the Senate President, Mrs Toyin Saraki and Lagos State First Lady, Mrs Bolanle Ambode, were among dignitaries that graced the commissioning of the Tomato Processing plant.