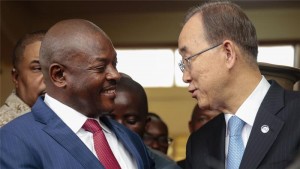 “Burundi’s political leaders must be ready to summon the courage and the confidence that will make a credible political process possible.”  It remains unclear which of his opponents Nkurunziza will be willing to negotiate with, as some are in exile, some are jailed and some have taken up arms.

Ban met both government and opposition politicians on Monday night before holding talks with Nkurunziza on Tuesday morning. He later left for the Democratic Republic of Congo on the second leg of an Africa tour that will also take him to South Sudan, where civil war erupted in December 2013.