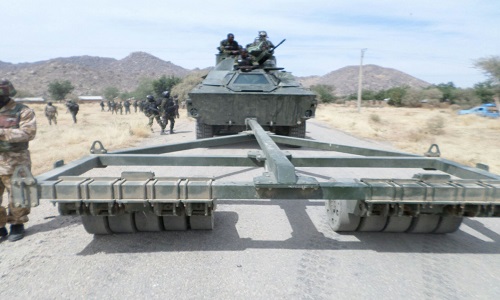 The Nigerian Army on Monday said Cameroonian authorities has handed over to it two suspected Boko Haram terrorists.
The Director of Army Public Relations, Sani Usman, said in a statement that the handing over of the suspected terrorists was indicative that the joint anti-insurgency operation by the nations was yielding fruits.
Mr. Usman, a colonel, said, “The cooperation between Nigeria and its neighbors has brought renewed vigour and is yielding fruitful result in the fight against the Boko Haram terrorists.
“For instance, apart from recording tremendous success, troops of 26 Task Force Brigade, cooperated with Cameroonian forces for joint operations in Kirawa junction. Although they have not met any of the terrorists in the axis of advance, they rescued 8 men, 36 women and 68 children in the area.
“To further consolidate on the cordial relationship, the Commander of Cameroonian 1st Battalion, paid a courtesy call on his counterpart, the Commanding Officer of 121 Task Force Battalion in Pulka. The visiting unit assisted with the demining of a section of the road between Kirawa Junction to Pulka and handed over 2 suspected Boko Haram terrorists to the Nigerian unit.
“Sadly however, one of the visiting unit’s vehicle ran into an Improvised Explosive Device (IED), buried along Pulka-Ngoshe road in which an officer and 8 of their soldiers sustained injuries. Unfortunately, the officer died while being evacuated to Douala by air. We wish to commiserate with the Cameroonian forces for the incident and the demise of the officer. May his soul rest in peace and give his colleagues speedy recovery.
“Similarly, troops of 113 Battalion on patrol to Ngwala cleared Boko Haram terrorists’ camps at Ngorta and Aritimie villages. The troops also came across the terrorists market at the area. However, on sighting the troops the suspected Boko Haram terrorists ran and abandoned their supplies.
“The patrol also conducted cordon and search operations around Ngwala and recovered 2 pick-up vehicles and 12 motorcycles belonging to the fleeing Boko Haram terrorists. The market has been closed indefinitely.
“It is pertinent to report that troops’ morale in the theatre of operation is very high and they are ever determined to clear remnants of Boko Haram terrorists wherever they may be in the North Eastern part of our country”.