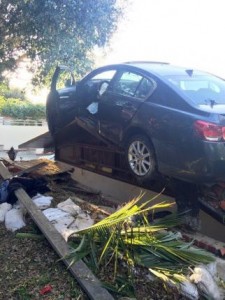 A California driver’s car landed on a roof after spinning out of control near a residential area in Palos Verdes. Los Angeles County Fire reported to the scene shortly after the incident occurred at 4 p.m. on Wednesday and shared photos of the vehicle on the roof.

Firefighters say the driver suffered from a medical condition that caused him to lose control of the car, hitting two parked vehicles before landing on the roof of the two-story home.

Only the driver was believed to be injured in the crash and he was immediately taken to the hospital in good condition.A woman was home when the accident occurred, but did not sustain any injuries and was not aware of the car’s presence until she was shown by a neighbor.

“You can’t believe how dumb it is,” she told CBS Los Angeles. “Awful!”The woman’s home sits below the busy Palos Verders Drive and a neighbor said cars have crashed into homes in the area in the past.