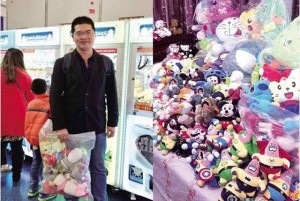 Chen Zhitong is an ordinary guy with an extraordinary hidden talent that he only discovered last year – he’s a master of arcade claw machines. You might think it’s a rather useless skill, but get this – he’s grabbed a whopping 3,000 toys in just six months, making him the ‘claw machine god’ of Jianghu shopping mall in Xiamen. he’s so good that claw machine owners actually invite him to dinner and try to convince him to stop using their machines!

“The first time I played was last year in July,” Chen told local media. “I saw the machine in the entrance of a supermarket. I didn’t think much of it, it was just a way to kill time.” He enjoyed himself, so he kept playing whenever he visited the mall, and within a month he got pretty good at it – so much so that people would gather around to watch him play. It wasn’t long before he cleared out an entire machine, and that’s when he knew he was gifted. His house is now filled with all the toys he’s won, over 3,000 of them. – they’re all over his bed, couch, floor, dining table, and even in his kitchen.

Now that he has all the standard dolls from these machines, Chen is quite choosy about when to play. “I’m not actually interested in the dolls themselves, it’s the process of getting them, it’s pretty exciting,” he revealed. The trick, he says, is all in observation – if you can judge how much the claw shakes, you’ll be able to judge the strength of its grip. “If the grip is really bad, of course you can’t get dolls with it.”

Based on his judgement, he then decides whether to play or not, instead of going overboard or wasting a lot of money. “I give myself a limit,” he said. “I figure that the cost of one doll is around ten yuan to make, so I don’t go over five yuan when playing, if I can’t get it, I don’t get it.” The most he has manged to grab in one sitting is 100 dolls.