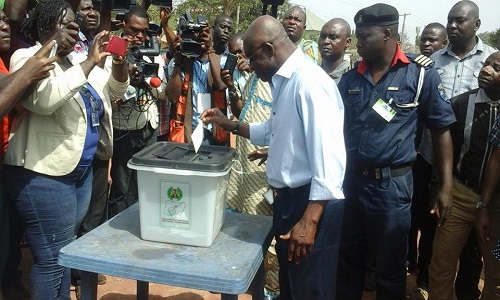 A twitter handle – @APCNigeria – which had in the past been used to issue official statements on behalf of the party, had shortly after the formal announcement of results of the rerun election, which Mark of the Peoples Democratic Party, PDP, won, congratulated him on his victory.

The former Senate president won an unprecedented fifth term to the Senate, defeating the APC’s Daniel Onjeh in the process.

However, a statement by Mai Mala Buni, National Secretary of APC, said: “The attention of the National Secretariat of the All Progressives Congress (APC) has been drawn to some false online publications reporting that the party has congratulated David Mark, the Peoples Democratic Party (PDP) candidate in Saturday’s Benue South Senatorial rerun election”.

It continued: “The APC has not issued any congratulatory message on the Benue South Senatorial rerun election.

“The ‘congratulatory message’ purportedly obtained from a twitter handle, ‘@APCNigeria’ did not emanate from the party. The purported twitter message itself is not credited to any APC official.

“The general public is advised to ignore the false message”.

The statement further states that only the national chairman, Chief John Odigie-Oyegun and Mala Buni, are authorized to speak on behalf of the governing party.