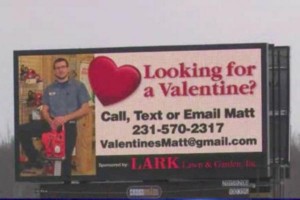 An unlucky-in-love Michigan man said he was shocked but amused when coworkers secretly created a rather large personal ad for him — on a billboard. Matt Hill, 25, of Fife Lake, said his coworkers at Lark Lawn & Garden had him pose for a photo he thought was destined for the company’s website, but he was instead shocked to find the picture and his phone number were plastered Feb. 9 on a billboard along M-37, south of Traverse City.

“Looking for a Valentine? Call, text of email Matt,” the billboard reads. “A couple of years ago, I’d have been really angry at something like this,” Hill told Mlive.com. “But we’re always doing crazy things.”

Hill said he has received dozens of calls, texts and other messages from people who have seen the billboard and some of them seemed to have genuine interest in a date. Hill told UpNorthLive his perfect date would be “pretty much a bonfire out in the middle of the woods” or “something small.”