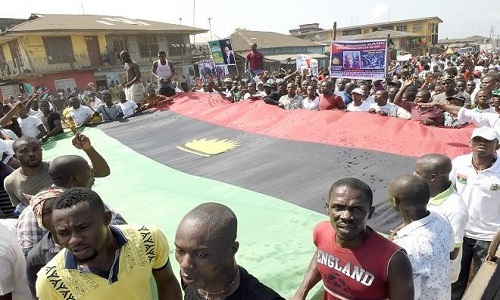 The apex Igbo socio-cultural organisation, Ohanaeze Ndigbo, has called for the establishment of a South-East Development Commission with the sole objective of tackling the infrastructure deficit in Igbo land.
The group said the establishment of such commission would mark an end to the agitation for the creation of Biafra Republic.
National President of the Ohaneze Ndigbo Youth Wing, Mazi Okechukwu Iziguzoro, who stated this in an interview with The PUNCH in Abuja on Saturday, said the commission should have a mandate similar to the Niger Delta Development Commission and the proposed North-East Development Commission.
The Ohanaeze youth leader attributed the current agitation for secession to the lack of Federal Government presence in the South-East geopolitical zone.
“If there is a strong federal presence in the zone, our youths will not see Biafra as an alternative, while fortune and fame seekers will not capitalise on that to hoodwink our gullible youths”, Iziguzoro said.
“Talking about infrastructure, there is no federal presence in Igboland. There are no good roads there and there are no viable industries owned or situated in the zone by the Federal Government that can cater for the employment of the teeming youths”.
The Igbo youth leader, therefore, urged the Federal Government to, as a matter of urgency, put necessary machinery in place to repair all major roads in the zone and to start the construction of the second Niger Bridge to create enabling environment for the establishment of industries.
According to him, “We need the South-East Development Commission that will be a counterpart of the NDDC, which will be well funded to comprehensively tackle infrastructural deficit and engage our youths in productive ventures.
“There is also the urgent need to revive the Enugu coal mine that has been closed down for 43 years, which can be an alternative power supply to the nation and create employment too.
“If the Federal Government can address these fundamental issues, we believe so much that the Biafra agitations would end”.
He stated that the Igbo were being marginalised in terms of federal appointments and allocation of resources to develop infrastructure, calling for the inclusion of the South-East in the current effort towards tackling social infrastructure crisis in the country.
He added that the Ohaneze stance was that legal means should be followed in the current agitation for self-determination in the South-East.
Mazi Iziguzoro further disclosed that the group had finalized arrangements to present the need for the inclusion of referendum in the nation’s constitution by sending a delegation to the National Assembly to include it in the proposed constitution amendment.