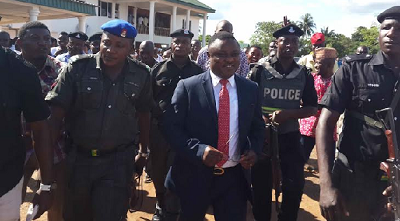 Governor of Cross River State, Prof. Ben Ayade, on Saturday ordered that the U.J. Esuene Stadium, Calabar, should not be opened for the formal reception of former Senate leader, Victor Ndoma-Egba (SAN) and 10 other stalwarts of the Peoples Democratic Party (PDP), who recently defected to the All Progressive Congress (APC).
National chairman of the APC, Chief John Odigie-Oyegun led other key leaders of the party to Calabar for the grand reception.
Oyegun and the APC national vice chairman for South/South, Prince Hilliard Eta, were told in no uncertain terms that there was an order from above preventing them from using the two venues they were seeking to stage the reception as they had already been approved for a PDP Youth rally.
Recall that a similar episode played out during the campaigns ahead of the March 28, 2015 presidential election when then Governor Liyel Imoke denied Muhammadu Buhari the use of the same stadium.
The then APC presidential candidate was forced to hold his presidential campaign within the confines of a ramshackle primary school compound in Calabar.
Apart from the former Senate leader, others to be formally received today include former Governor, Chief Clement Ebri; former ambassador to Mali, Chief Sony Abang; former PDP governorship aspirant and ex-NNPC general manager, Godwin Jedy Agba; Senator Bassey Otu and other political heavyweights from the PDP and the Labour Party.