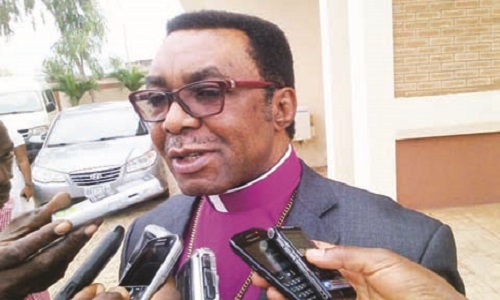 The Archbishop of the Enugu Province of the Anglican Communion, Most Rev. Dr. Emmanuel Chukwuma, yesterday, questioned the integrity of the leadership and members of the Christian Association of Nigeria (CAN) and Pentecostal Fellowship of Nigeria (PFN), saying the two influential Christian bodies had soiled their hands in the murky water of politics and must be ready to face the repercussions soon.

The outspoken cleric said he had reliable information to the effect that prominent members of the two associations – which are umbrella bodies for the Christian community in Nigeria – got involved in the sharing of the controversial $2.1billion fund meant for arms purchase and would soon be named and shamed.

The Most Rev. Chukwuma noted that when Christian leaders and members of powerful Christian bodies begin to visit offices of anti-graft agencies for probe over sharing of slush funds, both the integrity of such ‘man of God’ and the association he belonged would be questioned.

He said Nigerians would be shocked to the marrows when the anti-graft agencies begin to entertain them with names of prominent members of the PFN and CAN and the amount they collected under the guise of rendering ‘spiritual consultancy’ to the then government of the day.

Although he did not mention any name, the Anglican Prelate stressed that the Pastor Ayo Oritsejafor-led CAN and members of his executive as well as all the branches across the country, needs a serious purging, saying that the Christian body, particularly, has almost lost its integrity.

He claimed that CAN has been politicized, polarized and lost its effectiveness in evangelism and therefore, in need of total spiritual surgery.

Proffering a solution to the problems bedeviling the Christian community in Nigeria, Archbishop Chukwuma suggested that the CAN should legislate on the existence of churches in Nigeria and shut down all the churches that are not members of the body, to bring back sanity into the system.

“I think that this is the time when CAN has to legislate and find out the true churches in Nigeria as well as true pastors.

“Any church not under the group of churches recognized by CAN should be closed down. I did it in Bauchi when I was the CAN Chairman.

“I closed down churches that we could not establish their authenticity and originality.

“So, the time has come when CAN has to censor churches in Nigeria to know those ones that are genuine because they are bringing unnecessary dent to Christendom”.

Archbishop Chukwuma, who is overseeing 12 dioceses in Enugu province and would be celebrating his 27th anniversary as a Bishop in Anglican Communion at 62 years of age, also took a swipe at some ‘men of God, who he accused of commercializing the gospel.

“A Christian is somebody who is a follower of Christ, who is honest in his religion and somebody who exhibits Christian-like life.

“Most Christians today are not preaching the gospel of salvation but rather prosperity messages and that is why evil is on the increase because most churches are not genuine.

“Unemployment has made so many people to become pastors. Many of them are pastors by commercialization and not by calling.

“Churches have become commercial ventures and they cash in on the society because of hunger.

“Some are even prayer contractors. Very soon you will see what will happen in this Dasukigate. Many of them collected money for spiritual prayer.

“I know that I am not involved. But many of them are involved and soon, they will be named.

“I know that millions were distributed to some pastors and I must say here that Pentecostal churches must watch themselves.

“They are the worst in the denting of Christendom”.