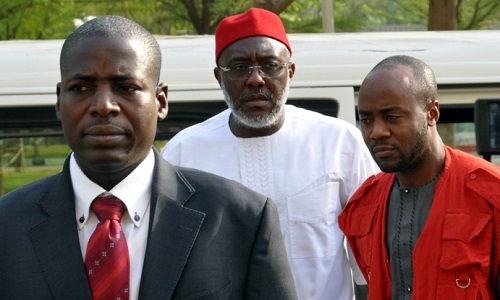 Sa’id said the money was allegedly transferred to Daniel Ford International Limited in two tranches of N200m and N300m for the purpose of buying a landed property at the exclusive Banana Island, Lagos.

The PDP spokesman is currently being prosecuted by the Economic and Financial Crimes Commission, EFCC, for allegedly receiving N400million from a former NSA, Sambo Dasuki, who is facing trial for his involvement in the $2.1 billion arms deal.

Mr. Sa’id, a member of the team that investigated the case, gave a blow-by-blow account of the activities carried out since the Office of the National Security Adviser (ONSA) petitioned the commission, which include the following:  a correspondence with Diamond Bank Plc to obtain the mandate and statement of accounts for Destra Investment Ltd; correspondences with other banks to obtain mandates and statements of accounts of individuals and companies relevant to the case as well as letters to ONSA and the Central Bank of Nigeria.

According to the EFCC official, responses from the CBN and ONSA confirmed that the former was given the mandate to pay N400m to Destra Investment Limited for the purpose of security services.

“After the payment of N400m by ONSA, a further N150m was paid into the same account by one Kabir Ibrahim.

“Capital Field Investment Limited paid another N91m and another N82m was paid in by one Eyitoye. These funds formed the naira equivalent of $2m, which Metuh gave to one Nneka Ararume, in cash.

“Amongst the disbursements made were N77.5m paid to one Yomi Badejo through his company, CMC Connect Ltd, to carry out campaign activities for the People’s Democratic Party (PDP); N25m paid to one Alhaji Abba Dabo to carry out media activities for the PDP; N21.7m to Chief Anthony Anenih; N5m to Chief Kema Chikwe; N50m transferred to the joint account owned by Olisa and Kanayo Metuh.

“The sum of N500m was also discovered to have been transferred to Daniel Ford International Limited in two tranches for the purpose of buying a landed property at Banana Island by the 1st defendant and his wife”, he said.

Mr. Saí’d, who further stated that the team visited the residence of the first defendant and invited him to the commission during the course of the investigation, told the court how Mr. Metuh shredded a statement he voluntarily gave.

“After he was interviewed, I asked him if he wanted to volunteer his statement and he answered in the affirmative.

“He endorsed the first sheet and the second sheet. When he was about to endorse the third sheet, in which he stated that the money he received from the office of the NSA were used for PDP campaign activities and to settle his personal debt, to the surprise of the team, he suddenly tore the sheet into pieces.

“The pieces of the torn sheet were then recovered from him and registered as exhibits.

“Much later in the day, he requested to volunteer an additional statement, which he did”.

After cross-examination of the witness by the defence counsel, Onyechi Ikpeazu, SAN, the prosecution counsel, Sylvanus Tahir, then closed his case.

Mr. Ikpeazu, however, prayed the court for adjournment, stating that he needed the certified true copy of the proceedings to open his defence. This motion was rejected by the prosecution.

After listening to both counsels, Justice Abang stated that the record of proceedings was not ready for certification, adding that it was not a valid reason for the defence to seek adjournment in view of the evidence that had so far been presented by the prosecution.

Consequently, the case was adjourned to February 18 for the defence to open its case.