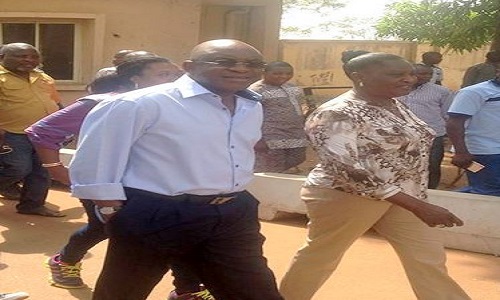 The Peoples Democratic Party, PDP, has described the victory of its candidate, David Mark, in the Benue South Senatorial rerun election on Saturday as a sign that it still enjoyed widespread support among Nigerians.

Mr. Mark, who has been in the Senate since the return to democratic system of governance in 1999, was declared winner early Sunday morning by the Independent National Electoral Commission, INEC, amid protest by his main challenger, Daniel Onjeh of the All Progressives Congress, APC, who demanded that the election be declared inconclusive.

However, Onjeh is protesting against INEC’s declaration of the PDP candidate as winner on grounds that the total number of votes canceled, which was 29,273 was higher than the margin of win (12,571).

In a congratulatory message signed by its spokesperson, Olisa Metuh, the main opposition party noted that since the setback of the 2015 general elections, its candidates have won 70 per cent of all the polls conducted under the APC-led federal government.

“It is instructive to note that the PDP had won 70 percent of all the polls conducted since May 29, 2015, a development that underlines the fact of its deep roots and popularity as a brand, irrespective of the transitory setback of the 2015 general elections”, the party said.