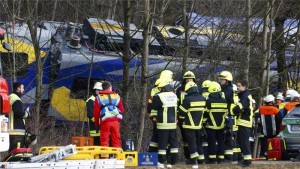 Police say at least nine people have been killed and more than 100 have been injured in an early-morning train crash in southern Germany. Emergency services tried to reach people trapped in the wreckage after two trains collided near the town of Bad Aibling, in Bavaria, around 7am local time on Tuesday.

Al Jazeera’s Dominic Kane, reporting from Berlin, said the trains had collided head-on on a single stretch of line between Rosenheim and Holzkirchen which links Bavaria with Austria. “Obviously German emergency services are scrambling resources right at this moment,” our correspondent said.

Police said of the injured located so far, at least 15 people were critically injured and 50 had severe injuries. The DPA news agency reported that one train was derailed after the collision and several carriages overturned. “This is the biggest accident we have had in years in this region and we have many emergency doctors, ambulances and helicopters on the scene,” police spokesman Stefan Sonntag told The Associated Press.

German Chancellor Angela Merkel said she was “dismayed” over the head-on collision. “I am dismayed and saddened by the serious train accident this morning at Bad Aibling,” Merkel said in a statement. “My sympathy goes out especially to the families of the nine people who have lost their lives.