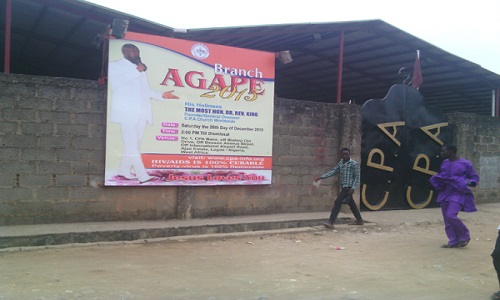 When members of the Christian Pentecostal Assembly, CPA, woke up on Friday morning, it was with high expectations that the man they call ‘His Holiness’, Chukwuemeka Ezeugo, a.k.a Reverend King, would breathe the air of freedom after 10 years of incarceration.
However, their hopes were quickly dashed as the Supreme Court yesterday upheld the death sentence passed on the CPA founder by the lower courts.
Rev. King was sentenced to death by hanging on January 11, 2007 by a Lagos High Court for attempted murder and murder.
The controversial cleric was found guilty of setting ablaze six members of his church on July 22, 2006.
One of victims, Ann Uzoh, later died in a medical facility from the burns she sustained.
On February 1, 2013 the Court of Appeal, Lagos Division, affirmed the judgment of the High Court.
In anticipation of favorable judgment, some female members of the church as early as 7AM were seen on the premises wearing green T-shirts with black skirts and green berets to match.
Another group wore white T-shirts and white berets.
They swept the floor, arranged the white plastic chairs in rows and generally tidied up the church, all in anticipation of holding a victory service.
Despite the Supreme Court ruling, some of the members insisted that ‘His Holiness’ cannot die as he wields too much power. Yet, others claim he was framed in the attempted murders and murder that resulted in his trial.
One of them who spoke with The Nation said: “His holiness cannot be killed even with the Supreme Court judgment. He said it long ago that no man is capable of touching a strand of hair on his head.
“The whole drama is a calculated plan by some people to bring his ministry down. It started in June 2006 when His holiness asked cult members, herbalists and other people with shady character in the church to either declare for God or leave the church.
“After making the statement, some people who believed they were highly connected came to him and told him that they would blackmail him and make sure the ministry was brought down.
“Thereafter, this ‘frame-up’ came up. For you to know that the case was a frame-up, did they bring the dead bodies of the seven people that were allegedly killed to the court to serve as evidence?
“It was all a ruse. Those seven people in question are roaming about the street and we do see them here in Ajao Estate. It was only Ann that died and it was these seven people that killed her. It wasn’t His holiness that killed her as alleged.
“She was going to put on the generator when they set fire on it. When she was eventually taken to the hospital, they went there and used pillow to choke her to death. That was how those people who vowed to deal with His holiness started carrying out their plans. But the truth is that they cannot kill him”.
Another member, who simply identified himself as Sunny, said though the judgment did not go their way, they remain confident that he would come out unscathed.
“His holiness cannot be killed. He is more than a mere human being and cannot be killed by any mortal.
“We were waiting with high expectations that the case would be struck out. We held a vigil yesterday and went ahead to clean the church premises waiting for his return. We didn’t have to pray for the case to be struck out at the vigil because we were convinced that he would be released.
“The Supreme Court judgment cannot dampen our morale because we are convinced that he would not be killed. He is not a mere mortal like the rest of us. He will come back home at the appointed time and by then, the people behind this whole thing will bury their heads in shame”.
Another member of the church called Obi said: “The judgment which is a human decision is not the final. A judgment that will supersede this one will come. We have total confidence in our leader and this is why we have not relented in our efforts to hold service.
“In spite of the judgment, we are going to have service on Sunday and celebrate him. For you to know how powerful he is, he has been providing solutions to numerous people’s problems right from the prison walls.
“He does this using online medium. Right there in the prison, the officials don’t go close to him because of the enormity of the power he wields. If they can’t go close to him in the prison, how would it be possible for them to kill him? It is impossible. I personally received divine healing through him before his arrest. I was having a terminal ailment and when he mounted the pulpit and pointed at my direction, the sickness vanished. This was in 2006 and till date the sickness has not come back”.