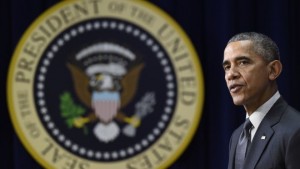 Mr Trump, a billionaire businessman, is the frontrunner in the race to be his party’s choice for the White House. He has won one state primary already, and leads the polls in South Carolina, where Republicans vote on Saturday. Speaking at the Asean economic summit in California, the president was asked by a reporter about Mr Trump.

The electorate will not pick him, said Mr Obama, because “they recognise that being president is a serious job”. “It’s not hosting a talk show or a reality show, it’s not promotion, it’s not marketing, it’s hard. It’s not a matter of pandering and doing whatever will get you in the news on a given day.” Mr Trump responded by saying it was a compliment to be criticised by a president who had done so much damage to the country.

The New York hotel developer’s antipathy to Mr Obama goes back a number of years – he used to demand that the president produce proof that he was born in the US. And his election campaign has continuously made headlines, for controversial remarks and policies.