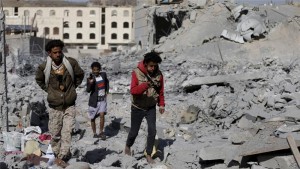 Battles intensified on Wednesday northeast of Yemen’s capital as forces loyal to the president backed by Saudi-led coalition air strikes killed more than 40 Houthi fighters. Days of clashes continued as the Houthi rebels and their allies who control Sanaa were on the defensive about 60km from the capital in the Fardhat Nehim area, pro-government sources told Al Jazeera.

Fardhat Nehim is a strategic region leading to the Sanaa, and government forces continue to capture villages after making territorial gains since last week.   Dozens of rebels and six government forces were killed in fighting overnight on Wednesday. Yemen’s army also captured 30 Houthis in Fardhat Nehim, where the rebels have a base, and troops were surrounding the fighters’ camp.

Five civilians were also killed when artillery shells hit residential areas, the Associated Press news agency quoted tribal elders as saying.  Yemen has been torn apart by conflict since 2014, when Houthi rebels allied with troops loyal to a former president captured large swaths of the country, including Sanaa. A Saudi-led coalition launched an air campaign against the rebels in March 2015. Since then, more than 5,800 people have been killed.