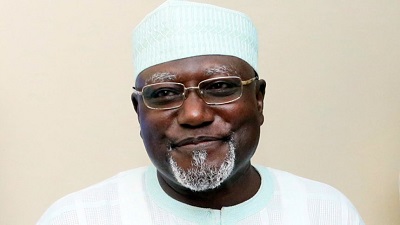 The Department of State Services (DSS) says it has arrested three suspects, who, according to it, had concluded plans to blackmail Lawal Daura, the Director-General of the service.
Parading the suspects before newsmen, on Friday in Abuja, an official of the service, Abdullahi Garba, said that they were arrested on Feb. 17 in Kaduna and Abuja respectively.
According to Garba, the plan of the suspects was to raise alarm that the DG of the agency collected the sum of N4 billion from the PDP governors of Akwa Ibom, Rivers, Abia and Taraba, to influence Supreme Court judgments in their favour.
He said the suspects were also to misinform President Muhammadu Buhari and the Nigerian public that the director-general had acquired choice property in Maitama and Asokoro areas of Abuja.
“The overall objective was to scare the director-general and put him under pressure just for the group to extort money from him to serve their pecuniary interest”.
Garba added that the director-general could not have helped the same PDP governors who daily accused him of not supporting them.
He said the activities of the group had become widespread, adding that it took advantage of the sustained war against corruption to further their illegal act.
“A method used by the group is to tell lies against their victims and also plant rumours about them in certain government circles”.
Garba said that they also used scaremongering and name dropping to deceive their victims to part with money.
He said that the service would not be distracted in its commitment to the anti-corruption war and warned mischief makers and self-appointed security experts to desist from dabbling into sensitive security matters.
“It is to be emphasised that the service will not hesitate to decisively deal with such persons and groups within the ambit of the law”, he said.
Meanwhile, the trio, who hail from Kaduna, Borno and Katsina, however, denied the allegation, saying that they were arrested on false allegation.
(NAN)