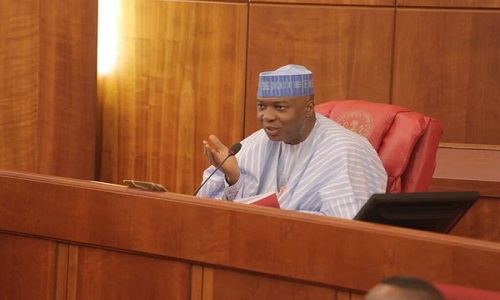 Senate President Bukola Saraki has said that the N1.84 trillion deficit in the 2016 budget constitutes a serious burden for government and the only panacea for the present economic decline is to look inwards.

Saraki made the remarks while hosting the President, Lagos Chamber of Commerce and Industry (LCCI), Dr. Nike Akande and other executives.

In a statement by his Chief Press Secretary, Sanni Onogu, the Senate president called on Nigerians from both private and public sectors of the economy to develop positive tax culture in order to sustain governmental responsiveness in meeting the demands of the citizens.

According to him, “the country is going through hard times. The truth is that, going forward, we must remind ourselves how we got to this situation where revenues have dropped significantly”.

“As a country, we are going through a very difficult time. This is not only in Nigeria, it is a global crisis. These days, era of easy money is over. We must engage private sector for better performance”, he said.

Saraki noted that the government must create an enabling environment for businesses to grow where the private sector has a role to play.

In her remark, the President, LCCI, Dr. Akande called for adjustment and sacrifice for both government and private sector interest, saying, such adjustment will help in revamping the economy within the shortest possible time.