The Ekiti State chapter of All Progressives Congress (APC) has petitioned the Attorney General of the Federation (AGF) and Minister of Justice, Abubakar Malami (SAN), seeking a review of the June 21, 2014 governorship election and the prosecution of those accused of rigging the poll.

The party, which described the alleged poll fraud as “extraordinary shame of the nation and unprecedented in Nigeria’s electoral history”, stressed that the action of those indicted in a recent finding by a military panel on the conduct of soldiers in the Ekiti and Osun gubernatorial elections, amounted to serious breach of the Constitution and Electoral Act.

In the petition endorsed by the APC Chairman in Ekiti, Olajide Awe, a copy of which was made available to reporters in Ado Ekiti on Wednesday, the opposition party in the state said the alleged fraud was a “criminal manipulation of the electoral process” insisting that all the personalities indicted must not go unpunished.

The Ekiti APC chair argued that the review of the matter had become imperative in national interest and to prevent a cycle of politicians that could seize the reins of government through treason.

Awe noted that the petition, which was the third to be forwarded to the office of the AGF, was necessitated by the recent confessions on Channels Television by the former secretary of the Peoples Democratic Party in Ekiti, Dr. Temitope Aluko, published and broadcast on other electronic and print media. 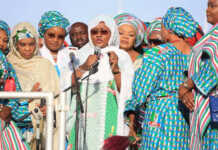